Distance: 80km
Distance can vary depending on wind and what route you take to navigate big lakes. Or what Access you start at.

Take your time and spread the days out. to Really Enjoy it.

Sorry their wont be a full journal here as its been 7 years since i’ve taken this route and my memory is shy.

This was the First trip my partner and i went on. I had paddled Quetico many times and was excited to show her just how awesome it is. We started out at Pickerel Lake. 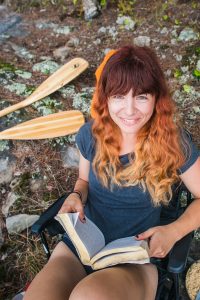 Unlike the French Voyagers who would only paddle up an hour two up the river so they where close by if they forgot something. I plan a big day my first day, as to get away from people as far as i can.

We paddled the big Pickeral Lake with its massive waves and open waters. Portaged into Dore, then down into Sturgeon, Crossing some beaver dams along the way. By the end of the day we had paddled 35km over 9 hours. We made our way up to Lonely lake. 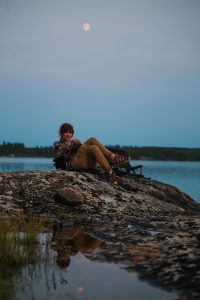 The day started like any other, hot humid and 30km to travel. About 6 pm we were coming off the portage trail when the sky turned. There were a few people on the lake ahead of us and only a handful of campsites.

Off in the distance, a thunderous roar grew closer and closer and we paddled on. It was odd seeing so many people this deep in the bush. A complete random coincidence that faith had landed all of us adventurous people on a small trapped lake with a front row seat.

We found one camp spot on the same island everyone was on and immediately went to work. Not a minute went bye after the tent and shelter were up before the downpour. And that’s when we first realized just how big this storm was.

Sheets and sheets of lightning flashed over us. The sound wave hit us like a bomb going off. With each bang, my heart throbbed more and more out of my chest, I could only imagine how Kyla felt, her first canoe trip and we could very well die tonight.

We were pitched under a small tarp between to trees. The storm was all around us. Covered on all sides. I cracked, I needed a distraction. And for that, I looked towards my camera. An idea that Kyla did not like. I explained that 10 feet this way or that way in this storm is not going to matter. I might as well take a good photo. 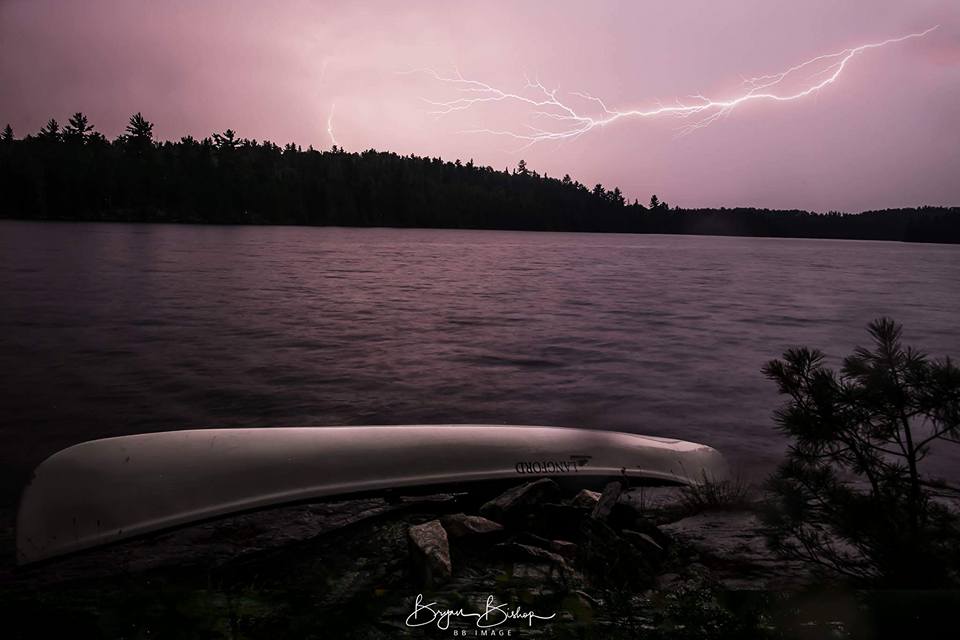 I set my tripod up near my canoe and got the cover on to keep it dry. I was terrified but amazed. Not knowing if the next strike would be on this island or not. Eventually, Kyla needed some comfort and we resorted to the tent. The small orange marmot tent gave her some peace of mind. Yet to me it did the opposite. Not knowing or seeing is the worst. But sleeping in a thunderstorm is amazing.

It was comedic as Kyla screeched with every bang. Scared and historical all wrapped into my arms. Eventually,, we succumbed to the long paddle from the day.Now, this photo is an everlasting memory. 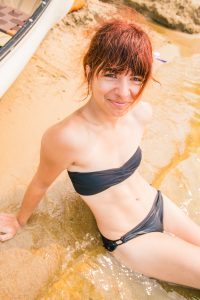 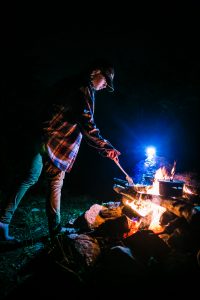 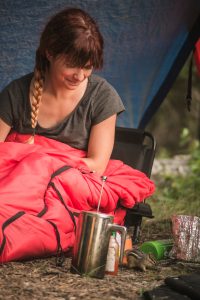