With large long Lakes and Rapids this trip is not for beginners.

Distance: 200km
Distance can vary depending on wind and what route you take to navigate big lakes. Or what Access you start at.

Features: Waterfall and Rapids, Clear River with Clams and Steelheads

Day 1:  We chose to launch at Santoy lake, having to drive less, and having the most energy for Diablo’s portage played in the role of decision making. We Launched around 10 am with a full boat. My Spouse Kyla, Aurora, Shutter, and Bear, (Our 3 husky mix) and I all loaded up into our Quetico 17 by Souris River.

We paddled the 8km from the boat launch to Diablo’s Portage. Right away we knew it was going to be a long day. It was 27c out, luckily the bugs were hiding from the heat as well. We managed to do the portage in two loads each. Doing 300m Intervals and returning for the next batch.   Il posts a video of the Portage down below in the image section so you have an idea of what to expect.  The first section is a huge 200-300m gain in elevation as it winds up the hill. It slowly levels off as you work your way up an old Glacier Deposit with huge boulders and small crevasses to route around.

The Steel River Provincial Park, made famous by this Portage

We got to Diablo Lake around 4 pm and did the 1km paddle across to our island campsite. We set up camp, made a big steak dinner, and rested for the rest of the day.

Day 2: Day two was a big day, we had a lot of water to cross. a 35 km day, a few portages, and beaver dams to cross to get to the end of Cairngorm Lake. I was told there was a campsite on the west shore someplace in the middle but we did not find it. We arrived late in the day after a long day of paddling a big lake.

Day 3: Having done this route before I picked out two of my favorite campsites for a rest day. That was our goal, to get to the first one. A Lovely Beachside nestled in the narrows of Steel Lake. It has these big beautiful Cedars that lean out from the beach towards the water. All this right next to a great Walleye Fishing hole.

It was an easy day and we arrived at camp around noon. To our surprise and disgust, it was trashed. Someone had been there before and cut down live green Cedars, to improve their view. Cashed a bunch of objects, and taken Craps right on the beach and left it unburied. We were really pissed off and spent some time cleaning the camp up back to is Natural self.

Later that day I was fishing when some local (Terrace Bay) went past us in an Aluminum boat. He later returned and I started chatting to him. Found out it was him camping this before us. He was reluctant to give me his name, but I think i got enough info to report him.

Day 4: We took a rest day and hung out on the lake, Fished and Relaxed. A much-needed break.

Day 5: Another big 35km day so we woke up at 4 am, made coffee and got on the boat by 5. We paddled up Steel lake early in the morning before the wind picked up. During sunrise, a bear thought the same, and he swam across steel lake right in front of us, before getting on shore, shaking off the water and disappearing into the woods. Kyla was very happy to see such a thing, referring to the bear as a Wild Puppy.

At 10 am we stopped on the upper main section of Steel and had breakfast. Left Tacos from the day before with some Bannock. By 3pm we had reached the end of steel and started the Portages into the river.

As fast as you start your southward bend you get right into moving water. With the first 2 sections of the river not passable during low water we waited in and roped our canoe down.  From then on it was some CI and CII rapids, 1 Portage and a few hours to reach our next camp spot. I wished we had camped at the top of the river and took our time fishing and running the rapids that day.

Day 6: We woke up at our beautiful Mckernan Lake Camp spot on a lovely sunny day. We wanted an easy fun day so we had planned to travel only 15 km downriver over the rest of the lakes to Rainbow Falls

Throughout the day we trained and played in a bunch of rapids and rivers and lakes. It was Kyla’s first-ever white water experience and she learned very fast how-to guide and steer the canoe into the channels. My self very new as well was very impressed well she performed. It took the dogs a while to adjust to moving water but by the end of the day, their anxiousness had passed.

Coming down the river we met up with an American group who where leisurely paddling down and fishing. They had it right as they where only canoeing the upper part of the river. A fish and fun trip i was kind of envious of. To our surprise they greeted us with a handful of cold beer and offered some freshly cooked walleyes. A nice Canadian Guestur if i ever saw one.

We arrived at Rainbow Falls by dinner time and set up camp. I took out my DSLR as we cooked dinner and prepared to do a star trail shot of the falls. The temperature dropped below 10 that night and kept the bugs at bay. A nice cold change to the very hot other nights we had. 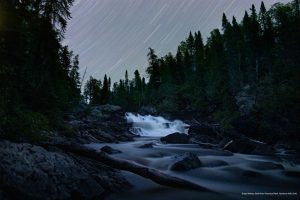 One of the images I pulled of the DSLR while we paddled the Steel River Provincial Park (North Western Ontario) This is Rainbow Falls, which at peak water its about 30 m elevation drop. Typically you cannot stand where I was. The shot was 30-minute Exposure. F4 ISO 1000. 24mm

Day 6: I dreaded this day the whole trip along 40km day of a boring slow-moving river. 12 straight hours of Paddling, a few stops for some nice Swimming in the clear Steel River. 4 Portages around long Jams. And we were back at Santoy.

Day 7: We woke up at 6 to try to beat the wind. But it was a losing battle, a storm blew in about 1km into our 12k paddle we realized no progress was being made. We got to shore and set up a canoe shelter from the rain. We waited it out with a cup of coffee for 2.5 hours before it settled down. Then the 2-hour paddle back to our car. 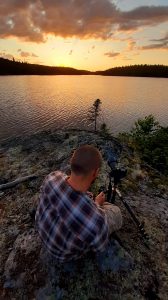 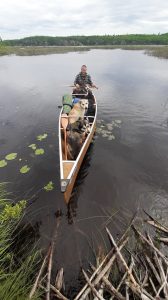 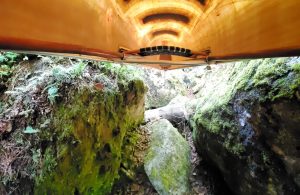 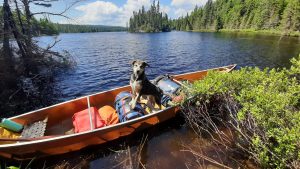 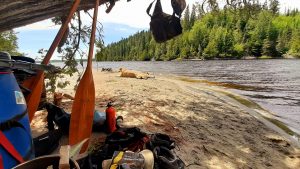 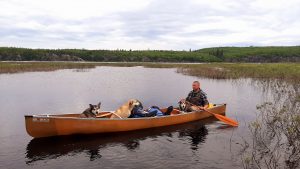 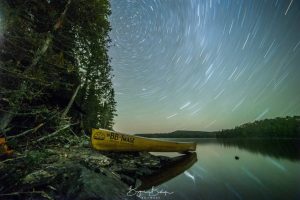 Paddling up the Steel Lake.